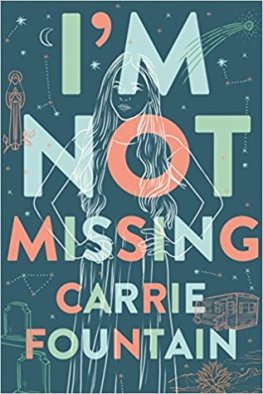 Carrie Fountain’s poems have appeared in Tin House, Poetry, and The New Yorker, among others.  She is the author of Burn Lake (Penguin, 2010) and Instant Winner (Penguin, 2014), and a recipient of the National Poetry Series Award.  Her first novel, I’m Not Missing, is forthcoming from Flatiron Books (Macmillan) in 2018.

DJ: When you’re writing, editing, or thinking about poems, what kinds of elements of craft are you considering (if any)?

CF: I don’t pay a lot of attention to metrics and I don’t typically write in form, but I respect those things and I think that when you’re a writer, especially if you’re a poet, the kind of obsession with sound and music in poems is a sense you have to develop.  I think what I’m most drawn to are poets who can make amazing sentences.  I love sentences and I love poets who can make sentences full of clauses — just clause after clause after clause — with a kind of unwinding syntax.  So, if anything, I’m devoted to syntax.  Young poets especially are often predisposed to sentence fragments, or else they stop using punctuation marks altogether.  You can stop using punctuation marks when you’re a master.  W. S. Merwin doesn’t punctuate his poems, but his sentences are impeccable — he’s just removed the punctuation marks.  Khaled Mattawa, one of my teachers from graduate school, used to say: “you can stop using punctuation marks, but you never stop punctuating a poem.”  This is all to say that really, if I’m outwardly obsessed by anything craft-wise, it’s creating strong sentences.

DJ: What’s the most important lesson you’ve ever learned?

CF: I don’t know about the most important lesson, but the best piece of advice I’ve had about writing, and choosing writing, and continuing to choose writing, came when I was still in college.  I was a double major in college; I studied theater and English, and I didn’t know what I wanted to do after college.  I’d thought about going to film school or going to work in the theater, but I didn’t really know.  I went to talk to the father of a friend of mine — he’s a writer and a playwright.  I told him that the only thing I’ve been doing consistently is writing poems, and I asked him: “how do I know if this is something I should pursue?”  He told me: “you have to ask yourself if there’s anything else in life you could be just as happy doing — it doesn’t even have to be happier — but, just as happy doing as you are writing.  Because writing is a hard thing to base a life on, and it’s a hard thing to make a career out of.”  I still think about that: is there anything else in this world that could make me as happy as writing makes me?  Not that writing makes me happy, you know?  But just as satisfied, or that I could do for the same kind of satisfaction, and I have just never found that — I’ve never found that other thing.  I think that’s a really good way of thinking about it because it also just invites in an idea that there are many different ways to be happy.

DJ: Who are some non-poets/non-writers who have inspired or influenced you?

CF: When I was in high school and college, I was very interested and inspired by César Chavez and Dolores Huerta and the workers’ union they founded.  I wanted to be a union worker for awhile, but also that would probably be the worst job for me.  When I was considering going to graduate school, one of the other things I was thinking about doing was going to the organizing institute and learning how to be a union organizer.  That movement meant a lot to me.

DJ: Tell me, if you will, about any difficulties or struggles you’ve had writing poetry.

CF: I think we’re taught how to approach poetry in the wrong way, like it’s a puzzle or a mystery you have to solve while you’re in there, and the payoff is in figuring out what everything means.  And if that’s what reading poetry is, why would anybody want to do it?  Why would anybody ever want to do that again — because that’s what you do on a standardized test.  The experience of reading poetry is not taught, and of course it’s not taught, because high school teachers — and I feel for them — have to give tests about poetry and come up with questions to get answers that are either right or wrong.  And that’s an approach to reading that I’ve never felt comfortable with.

When I was in graduate school, I established a writing practice that I really took forward — a daily practice of writing poetry and being in that space — and I was waking up very early in the morning to do this.  And then I had kids and that got harder — I mean, it’s hard to wake up earlier than a toddler because they wake up at like five o’clock in the morning.  It just starts becoming a different life you’re living when you have children.  And it gets harder and harder to make that daily practice of writing.  And then when I was teaching and working on my novel (I’m Not Missing) it became almost impossible to make time for poetry.  I found it very hard to write both fiction and poetry at the same time.  And now my work on that novel is done, but I’m working on a new one and I want to approach it in a different way because I want to bring poetry back into my life.  That has been really hard to get back into.  It’s a practice, right?  So, the last couple of months I’ve just been sitting down and doing my daily writing practice and hoping that it comes back.  I have to say that I’ve been trying to finish, not just practice, but finish poems, and it’s been so strange to me because I feel so removed from the idea of a finished poem.  Like, what does a finished poem even look like?  How does it feel?  Writing poetry for me is very much like a spiritual practice — it’s as close as I get to a spiritual practice.  Whatever comes out of it comes out of it.  I think I could quite honestly be quite happy if I could practice my poems and share them and get them published here and there.  I’ll probably put together another book of poems, but it doesn’t feel like life or death to me anymore.