I like to think of memory as a permanent, if imperfect, part of our genealogical heritage. Like culture and (sometimes) religion, memory is passed down from one generation to the next, in the form of stories and jokes. This book is an attempt (was an attempt, since the generation of it, and your reading of it, are now but memory) to break open heritage in the form of one family’s memories to distill where we come from into a drop of cultural understanding. Like Feminist poet-warrior bell hooks in Appalachian Elegy, those of us from rural areas struggle to change our circumstances even as we struggle with our “memory against forgetting.”

I feel a kinship with Seamus Heaney’s boyhood in rural Ireland as put forth in his Nobel Prize Speech; he says, during wartime, “If there was something ominous in the newscaster’s tones, there was something torpid about our understanding of what was at stake; and if there was something culpable about such political ignorance in that time and place, there was something positive about the security I inhabited as a result of it.” In today’s American political climate, it is impossible to escape feelings of dread and urgency; in my youth, without internet at home and no cell phones until I was a teenager, tragedy and injustice were fathoms away, things that only manifested on the television or in the mouths of big city politicians, and never on the radio because we only listened to country music stations. (Eventually, we switched to pop music, coinciding with a major shift in the dynamic of my family: the teenage years of my younger sister, Nicole.)

There was a time when my sister and I thought we would never grow up. Some people in small towns don’t grow up until they’re forced to get a dull job, or become pregnant, or move away. It was our goal to continue making mud pies (and eating them) as long as humanly possible. Then she became a teen, which made me even more angsty, and we grew a distaste for small-town life.

As with most younger generations, we eschewed the things of our parents (at first) including religion and taste in media. I was the bookworm of the family, devouring everything edgy in my path. We watched horror movies in secret, we tried alcohol when they weren’t looking. But unlike most kids of small-town Catholics, we left. I moved away from Kentucky first, as an 18-year-old, to attend college in Chicago. This made sense: to leave. I was interested in the arts, in writing, and theatre (of late), and there were few opportunities to pursue those things in Kentucky, on the Ohio.  My parents always supported me— that I’ve gained an appreciation for. I left the town for the city, and my sister soon followed, both of us gaining a new perspective on the size of the world and the scope of its problems.

We both grew up, in a real way, out of sight of our parents, though not out of touch. I read more and I became what I am now: an adult, confused, hungry for more experience. My sister pursued medicine, then political science (briefly), then accounting, proving again and again that knowing what one wants is a journey, not a decision.

I never imagined, as a quietly rebellious child, that I would one day write a “quasi-defense” of small-town America, using Henderson as an example. I wanted out! What was there to like, after all? Small towns are small, often consumed by xenophobia and religious fanaticism, and Henderson is no exception. Confederate flags still fly in the South. I never met an atheist in Henderson. You could count on one hand the Latinx students at my school. Underexposure, and an unwillingness to understand other ideas and cultures, is prevalent in small-town America, especially in the South. People are proud, defiant of the ever-moving culture in “the big city.” This feeds fanaticism, extreme conservatism, and racism. However, it can also provide a stillness for reflection.

Those of us who have seen the world have new perspectives on our home space. Those of us from small towns tend to have an even richer perspective: we know where we come from and can see where we want to go. Only by understanding can we reach a better American climate. Those who would turn us against one another appeal to the territorial in us, the “small-mindedness.” But small-town pride also leads to generosity and compassion in the large-hearted. That Southern “myth” of the front porch lemonade chat with strangers is no myth, and there’s no animosity behind it. Genuine people genuinely love, and it’s those who understand small communities that love the hardest. They’re not without fault; openness to other types of people and other ideas is something I hope small town America sees on a large scale in the next decade. But wouldn’t it be nice to also return to the porch with that understanding? To share, soon without fear of judgment or bias?

I will leave you with one more distinct set of memories.

The Shoemaker family has hosted a Christmas party every year since I was a child. This all-family event, to which the entire 80-plus extended relatives consistently came, was one rock upon which our understanding of each other was built. Another rock was the Church. These parties, often both for a smaller group on Christmas Eve and for all after the date, were enormous and full of noise, cheerful noise. Family games were brought up in tournament form. Every cousin bought a gift for another cousin, whether you knew them or not. We were bonded by the common ancestry we held, from Ray Shoemaker on back, but we grew to appreciate and understand one another through events like these. They were a rite of passage for potential additions to the family, to vet the sweethearts and invite them in, and we knew who our favorites were. Most of the time, they would stay.

Memory is fluid, warping when we recall it, but the original neural pathways are still there, somewhere. My grandmother was given a memory quilt at one Christmas party, a quilt to which every family unit contributed a square that signified their relationship to “Mom.” That quilt hangs in my aunt and uncle’s home, where my grandparents now live.

I’d imagined, somehow, they would always live on First Street, where I’d grown up playing on the cellar door. I forgot that they had lived once in Louisville, and on Graham Hill, and, once, “Tywhoppity Bottoms” (of yore). People and places tend to move on.

We have dragged Christmas trees through the mud with a mule team (wondering, could an 8th grader today do that?); drilled holes in trees to add branches decorated with bulbs or popcorn-and-cranberry strings; we’ve had pink aluminum trees with rotisserie lights, or Douglas Firs; we have revealed the tree with childlike delight, or left the White Room open for visitors; we live, here or there or Anywhere; we retain memory, in our blood, our mind.

I used to sit with my Grandma during these holiday parties. Rather than play games or socialize with my peers, I wanted to listen to the stories Grandma told, and laugh with her— to absorb these precious memories of home.

Because home it still is, where the bluegrass grows and the Ohio runs. In that place, there are many obstacles to confronting the new and modern world. Willingness to compromise while building a sense of history and community and “right” is a stumbling block many have yet to overcome. But change occurs, in small steps, whether on First Street, Main Street, in an assisted living home, or on Graham Hill. We must be ready to move and change, and let memory bond us across the ages. We can put aside distrust and see the beauty of love and faith in something greater than us, the hope that we can better others. Because something magical happens when one steps onto Main Street America— doors open, smiles and laughs crack, the air feels warmer. The genuine nature of the small town is its saving grace, and is still within us all. 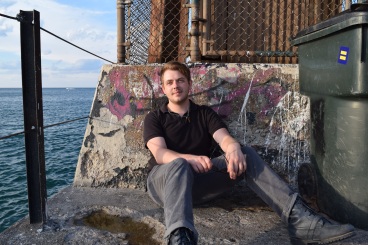 ROBERT ERIC SHOEMAKER is a poet-playwright, educator, and theatre artist. He is an MFA Candidate in Naropa University’s Jack Kerouac School of Disembodied Poetics. His work has been featured in Mount Analogue; Roar; Kairos; Columbia Journal; Water, Water Everywhere; BEATS; Mosaic; Tooth N’ Nail; Rollick; Literature Emitting Diodes; Chicago After Dark; Thought Notebook; Baseball Bard; Verde Qué Te Quiero Verde; and his collection 30 Days Dry. Eric’s next books, We Knew No Mortality and Ca’Venezia and other tales, are expected in late 2017 and early 2018, respectively. Eric is the founding editor of BEATS and director of Poetry Is Productions. Follow his work at reshoemaker.com.