I’m thinking of that day up on Copper Creek Bridge when she said, You wear the fireman’s hat. I’ll wear the sunglasses.

Both of us in our underwear and not yet sixteen. Shoulders touching. Fifty feet of air between our foot soles and a narrow watercourse of indeterminable depth.

The skirl of an approaching train’s whistle. She grabs my hand, says, Poor shy boy. Says, So much could’ve been, then guides my fingers into her mouth and sucks.

High in the Appalachians, a hidden forest of bluebells sweeten the air. Swaths of African purple and French sky blue among the russet and gold of fallen leaves.

The track tremors. The train rumbles into view and she’s laughing like her father never hurt her, like mine will one day return, like either of us will escape the garrotes of this bankrupt town.

She wants to know. Her eyes electric with the moment, her heart wild enough to be loosed in the backlands with only a sharp knife.

The train is on us, the noise deafening. We slip off together, hand-in-hand, her in oversized aviator shades, me in my fireman’s hat, both of us in that inevitable and imponderable space between fates.

Trains chug off, as they do, hauling the decades with them. People move on, lose track. Some make it. Others don’t.

Certain memories still leap up, though. Little spring ephemerals to sweeten the air, to make, for a moment, the impalpable less uncanny, then die back to root. 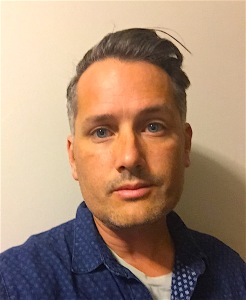 Seth Clabough is the author of the novel All Things Await (2016).  His writing appears in places such as Blackbird, Litro Magazine, storySouth, Aesthetica Magazine, The Chronicle of Higher Education, New Writing, Magma Poetry, Writing in Education, Women’s Studies and numerous other publications.  He joined Randolph-Macon College as the Director of the Communication Center and an English professor after holding similar positions at Longwood University and Sweet Briar College.