DODOS MIGHT BE the only animal in history to go extinct because of stupidity, I think as I watch the blue jay in my feeder gyrate around the rim like a propeller. When he takes off, he is as likely to hit my window as the sky, scaring the bejesus out of my cat who has been watching him carefully for hours.

And sometimes I wonder about the birds.

I wonder about the birds when the wren skitters across the flagstones, his beak stuck up so that he must thrust his butt up to keep balance until his sway-belly fulcrum drags the ground.  He warbles a gorgeous melody but his virtuoso ends abruptly when a Cooper’s hawk gets hungry and the prodigy’s rhapsody ends with a squeak and a few floating feathers. The hawk, however, has his dinner interrupted when a murder of crows mobs him for no apparent reason, as if he has committed some fowl treason against his betters.

I would get a lifetime sentence for what is daily done among the birds, these highway robbers prying eyeballs out of roadkill. The worst of them then lands in my bath, the cuckoo bird, a serial killer hatchling who exists only because he shoved his foster brothers out of the nest, and sometimes I wonder if he is watching me.

A woodpecker moves like a torpedo through the trunks beyond my yard, trunks he butts his head against in search of insects, and I wonder what ingenious mechanism God designed to ensure that he does not further lose his mind.  His tongue, you see, extends inside his skull and snakes around his brain, which he cradles and holds suspended like a gyroscope, the same tongue he sends slithering into trees after maggots and cockroaches, and that gets me wondering why God chose to populate the sky with lunatics with wings.

I wonder if the bald eagle will redeem the birds, those symbols of liberty and majesty, whose keening calls let freedom ring over Mount Rushmore and Mayberry, but then I go to the zoo to see my nation’s pride and boy did I wonder what our Founders were thinking. If you are ever standing on the Statue of Liberty and a patriotic mood overcomes you when bald eagles float by, you will wonder why they are stealing fish from other birds and chirping like chickens and seagulls, just another thing the government probably wishes you didn’t know. 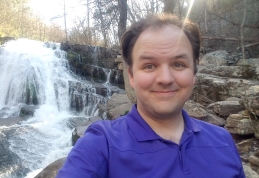 Alex Pickens has lived over 20 years in southern Appalachia, where he spends much of his time hiking and bird watching. His work has recently been accepted by The Inkwell Journal, Maudlin House, Pretty Owl Poetry, Brilliant Flash Fiction, Eastern Iowa Review, Gone Lawn, Jersey Devil Press, Crack the Spine, and Moonpark Review, while his flash fiction has been nominated for a Best Microfiction, 2018 anthology. He is a direct descendant of a Revolutionary War general nicknamed “The Wizard Owl.”