“WHERE AM I?” she asked, slowly raising the lids of her hazy green eyes for the first time in about an hour.

“Hi, Mom.” I lifted her frail, arthritic hand and gently placed it in the cup of my other hand, surprised by its absence of weight. The rest of her diminutive body nestled bird-like among puffs of pillows lining a reclined wheelchair. Hardly the best place for a nap, but for an 85-year-old with a fractured hip and pelvis, it would have to do.She smiled faintly, then, squinting into the afternoon sunlight, repeated her question: “Where am I?”

“You’re in the little garden at the nursing home where Daddy was. Remember?” I was asking her about two separate things, and wondered if she remembered either one.

“You had a fall.” I tilted my head to the left to shield her face from the sun. “You were in the hospital for a while, then the rehab.” She squinted again, this time at me, clearly puzzled. “But you didn’t feel well, so they brought you here. I got back as soon as I could.”

“That’s nice, dear.” Her voice was muffled as it drifted up from the pillows. She raised her head and gazed across the courtyard’s small patch of landscaping toward a hedge of late-summer, pale cream roses. “Are those florabunda?”

Now I was puzzled. For weeks we had been having the same conversation, in person and long distance, trying to piece together the sequence of events—from her fall in the laundry room of her apartment building to her month of unsuccessful attempts at rehabilitation. She grasped at the illusive memory fragments as if they were lightning bugs, yet she could remember the Latin name for the garden hedge.

I pushed the wheelchair closer to the hedge, then dragged a screeching wrought iron chair across the bricks, positioning it so she could see me as well as the flowers.

“Listen,” I said. “I could write everything down for you. That way, if you get confused when I’m not here, you can just read it. Sort of like a story.”

“Not a good one,” she muttered.

The “when I’m not here” phrase stuck a bit in my throat as she closed her eyes, the breeze ruffling the blanket I had pulled up around her chin.

Later, in her room, I struggled with the story I promised to document. So far our conversations had focused on the facts—minimizing the long nights in the hospital and the pain medication that caused her to see bugs crawling across the floor, glossing over her endless frustrations with rehabilitation complicated by osteoporosis and arthritis, avoiding the diagnosis that she most likely would never return to her independent life.

An unexpected power to create memory emerged from the fragments of the account I was trying to assemble. Like the scientific experiments that use suggestion to implant false memory, I suddenly possessed the ability—through both what I chose to say and what I chose not to say—to shape the way she remembered the incident. The same power, I imagined, that she exercised over me when I was small. Of course you love beets, don’t you remember? Last summer you were really good at swimming, so you’ll be even better this year.  But I was creating a script to frame the last stage of her life. Should I omit the parts that made it ominous and precarious, or create an alternate scenario that might buoy her through the long days ahead?

A list of the facts, sterile and succinct, somehow seemed the more compassionate option. We would have to let the long days unfold.

Autumn, same garden. A brisk breeze, trapped in the enclosed space, chased a bucket-sized pile of dried leaves around the four sides of the courtyard. Maybe I shouldn’t have done it—pushing her, engulfed in blankets, quickly past the nurses’ station before they could question me—but she was so anxious to be out-of-doors.

She appeared healthier than at my previous visit, more mobile and alert. There were no questions about her residence or length of stay; she seemed to appreciate, even enjoy, her new home. In an upright wheelchair, it was easier to study the long-expired roses. Mom’s timid voice broke the stillness. “Did I lie on the floor a long time?”

The question hung in the air like smoke from a cannon burst. For a moment I saw her crumpled on cold concrete, and shivered.

So this was the uncertainty she still carried with her: What was the moment like before she slipped out of consciousness and her life changed forever? Truth is, I didn’t know. Details were sketchy. The woman across the hall was going out and thought she heard something in the laundry room, looked in and pulled the emergency cord.

Again, I was struck with the power I held to create memory—honest or false—and with it, the question: which one of us was I really protecting? Was I trying to assuage my own guilt for not being there, for not taking better care, for getting angry, for minimizing her pain?

“No, Mom. Fran across the hall heard you fall and called emergency right away.”

“Thank God for that.” She nodded as though finishing a book with a satisfactory ending.

And it could be true, I thought. At least it would be from then on. Our shared story that brought a bit of comfort to both of us. 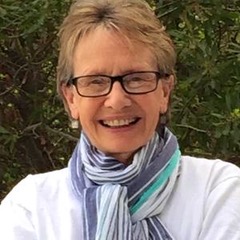 When not traveling and birding with her husband, CINDY CARLSON has spent most of her adult life along Virginia’s Chesapeake Bay. After a long career in youth development, she is enjoying retirement as a writer. A winner of the 2016 Hampton Roads Writers contest for creative nonfiction and a reader for WHRO radio’s Writers Block, her work has appeared in several travel journals, The Quotable, The Wayfarer, Bird’s Thumb, Hippocampus, Tiferet Journal, and is forthcoming in Chautauqua.