“How would you like to watch a movie by Walt Disney?” the pleasant voice enthused over the phone.   I hadn’t been answering the phone much because I had my big student presentation coming up the next day. Really tired of reading about Renaissance literature, I was glad I picked up that heavy black receiver this time. Somehow Abraham Fraunce had become my man to report on in class. And he was as tedious as he was obscure. Walt Disney might be just what I needed.

“We are members of the Church of Latter-day Saints,” the telephone voice went on, “and would like to come to your home and show you a Walt Disney film and make a presentation.”

An idea came to me as good as Abraham Fraunce’s in latching on to Sir Philip Sidney.   My fellow grad student, Lawrence (“don’t call me Larry”) Jackson hated Walt Disney almost as much as he hated religion, saccharine, pointless, sentimental Bambyism, he called them both. My views weren’t all that different. And while I certainly didn’t hate Lawrence, he sure had stuck me with an awful Teaching Assistant schedule in his role as Student Director of TA’s, to say nothing of not recommending me for merit pay, me being his pal and all.

“Will you give us your name and address?”

I opened my crumbling paper address book, dated 1956 even in then in ‘66, (I didn’t seem to need much space for new friends) and quickly looked up one of the few additions, Lawrence Jackson.

“I’m Lawrence—you can call me Larry—Jackson. I live at 221 High Street. Through the red door to the right of the drugstore, up the steps. I’m on the left.”

I thought of Lawrence’s Teaching-Assistant schedule. I wanted him home to greet his new found religious brethren.

“I’ll say,” I added enthusiastically. Of all religions, Lawrence attacked most the young “corn-fed faces in white shirts and ties” that seemed to be swarming around Morgantown since that fall of 1965. I was just loving the possibilities of confrontation, embarrassment and ridicule, to say nothing of possible damnation, a sort of Daniel, in this case two, in the Lions’ den. Next to Abraham Fraunce, this could be Disney World in Appalachia.

Lawrence was a real Appalachian character, the genuine article from West Virginia. Born and bred there, knew the history all the way from Stonewall Jackson (he was a distant relative) to how to make redeye gravy. Lawrence had one of those great classical educations like Senator Robert Byrd’s—great reader, pretty good bluegrass and blues guitarist, straight forward and sincere—for example, thought of me, up to now, as his best friend. Nonetheless he was, like a lot of West Virginians, on the suspicious side, with religion at the top of the list. We were fellow graduate students in the Master’s in Literature Program at Morgantown, about the same time the legendary Jerry West was tearing up the WVU and Eastern Conference university basketball courts, one more person more interesting and distracting than Abraham Fraunce. We did pretty well together, me and Lawrence, I only watched Jerry. We both liked music and drinking, and he had some interesting home-grown characters as friends, like Crazy Bob the Chicken Killer who managed one of the first of those industrial chicken farms. And Archie Jones who was one of the best 12 string guitar players I have seen to this day. We all hung out at Sleepy’s Bar and Grill, told lies, and planned grandiose lives that would never happen, at least in my case didn’t. All that talk and booze bred some rivalry.

I could barely contain myself a week later on Tuesday when we did our Beowulf translation, again at Sleepy’s, drinking our prosaic version of Viking mead—Old Milwaukee beer—and having a laughing fit over the strange language like “wring-prowed gigi.” Sleepy’s in those days was a little like a Mead Hall. The long wood tables, darkness, gloominess really, all men then, drinking and bragging and laughing like we were heroes and everything was going to be conquered and fine. Almost put me in a good enough mood to tell him about the coming of the Mormon boys. I came closest to cracking again when bartender Sleepy served a free one too many, but I kept Walt and his boys to myself. One thing: I’m patient—I’m still waiting for my proposed Ramist/Fraunce rhetoric monograph to get accepted.

Wednesday came around, and about 4:00 PM I was getting a little antsy. And starting to think that, fun as it would be to hear about, I would miss too much, sort of like reading about the basketball game rather than being there. Anyway, I didn’t want to be totally dependent on Lawrence, who might not be in the mood to tell the story very well, certainly not in any detail. And I didn’t forget that Lawrence still had control of my schedule for next year, to say nothing of that merit pay.

So a little after 4:00 I cracked and called him. Lawrence didn’t laugh like I hoped he would. Just gave me that deep Appalachian-polite, but ominous, voice.

“You better get over here with some beer, a lot of beer, cold, right away.”

I got moving, and fifteen minutes later I was at his door with two six-packs of 16-ouncers. The Mormons were a little late, so we had time to do a little prep work—about three each.

“Maybe we shouldn’t drink,” I said.

“Why not?” Lawrence shot back.

“What the hell do you know about their sacraments? Jesus drank, didn’t he?”

“Our old-time Jesus, but maybe not the latter-day Jesus.”

“Do you know any of this stuff, or are you just making it up?

“Just like you – no point in sullying the resources by consulting them, like with your rhetoric paper.”

I was saved by the door knock.

The movie was actually pretty good: a short history of The Church of Latter Day Saints and a section of the major principles, mostly about the importance of family. A little heavy on how wonderful Mormons are, but what could you expect? The boys then did a little talk. They were very polite in their semi-IBM outfits. They heavily emphasized the community aspects of the religion and famous Mormons—like Deacon Vernon Law, who pitched pretty miraculously for the Pittsburgh Pirates back then.

Then these two nice boys went into what I think salesmen call “the turn.” That’s “the pitch” to the rest of us. Anyway, they are going on and on in a sort of modified Socratic fashion asking us question about logic and faith and, then answer them just right for how Mormonism would be good for anybody. My pal Lawrence answered the last question about what’s worth believing with the unforgettable: “You have to understand our keenly honed minds just can’t accept this glib analysis of spiritual beings.”

And then these nice boys did something I’ve never seen the likes of before or since.

They were both tall, good-looking; they could have had lots of dates or played basketball for a university—one kind of looked like Jerry West, long arms and all—done all of those fun young things instead of touring the country for their Mormon religion. They both simultaneously dropped to their knees There they were: nice young men kneeling, their clean pressed pants wrinkled and soiled on Lawrence’s dirty floor, still in the flickering light of their projector, looking up to the ceiling and I guess to the sky above it. Almost angelic: I got goose bumps.

Lawrence and I, on the other hand, were sitting on the couch, the best seats in the room, swilling down the 12 ouncers, a little bleary-eyed, hungry. I even heard my self burping on my cheap beer, involuntarily of course. I thought even then, to them we probably looked a little like bums, lost anyway. It occurred to me that must be why they call it “missionary work”. Although I theoretically, intellectually, thought I was on Lawrence’s side, that “keenly honed minds” remark stuck in my craw.

For a long time after, I kidded Lawrence about his “keenly honed mind”, but held close my envy of those boys. 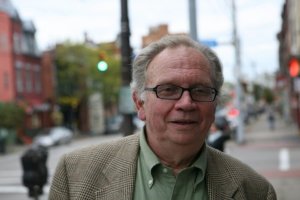 A seventh generation Pittsburgher, Jay Carson taught creative writing, literature, and rhetoric at Robert Morris University for many years, where he was a University Professor and a faculty advisor to the student literary journal, Rune. Jay regularly presents, reads, and publishes. More than 70 of his poems have appeared in local and national literary journals, magazines, and anthologies. He co-edited with Judith Robinson a collection of Margaret Menamin’s poetry entitled, The Snow Falls Up. Jay has recently published a chapbook, Irish Coffee, with Coal Hill Review. A full-length book of his poems entitled The Cinnamon of Desire was published by Main Street Rag in the late fall of 2012. Jay considers work Appalachian, Irish, accessible, the problem-solving spiritual survival of a raging, youth – and just what you might need.