NA: When did you first start writing/consider yourself a writer?

RS: I was a journalist in my twenties, so in one sense I’ve always been a writer—listening, observing, scribbling away. But the transition to novelist and creative writer took some doing and some time. Finally, after years of struggle and transformation came the day when I held in my hands the hardcover edition of my first novel, sent me by my publisher; it was then I felt I could claim to be a writer.

NA: What aspect of writing, do you find, is most enticing?

RS: When you write a novel you create a world and characters that did not exist previously and would never exist if you had not created them–and if you’re good, you make it all seem real enough and affecting enough that it provokes real emotions in the reader. It’s that act of creation of a living artifact, getting to play the role of a minor god inventing living worlds, that most appeals to me.

NA: Of your works, most seem to revolve around your real-life location and setting. How intertwined with your work does your environment become, and why do you think that is so?

RS: Setting is crucial, as setting determines character and character determines plot. So I work to nail the setting—the sense of place, the weather, the geography, the architecture, the history, the culture, the aromas, the vistas, all the telling psychological, physical and sensory details—in order to create a fictional world that feels real. The job here is to pull your readers into this created world and allow them to live there along with your characters, to feel a part of the drama. So any physical detail that doesn’t square with the reader’s knowledge or experience breaks that dream and undermines the desired effect. This is also true of affected prose—which makes the reader conscious of the words, keeping him or her on the surface of things rather than immersed in the story. I try to make the words on the page disappear for the reader, so the reader can see, feel and live the fictional moment in a realistic environment.

NA: As a graduate from the ODU program, and now coming to its Lit Festival, in what ways do you believe that the program benefitted you?

RS: First, I gained some fine colleagues, writers to whom I remained connected, who are still helpful and supportive, and whose careers I follow with interest, albeit from afar. Also, my work at ODU expanded my appreciation of creative nonfiction, opening up creative doors that swing back and forth between fiction and nonfiction, alerting me to new creative vectors for my writing. Seriously.

NA: What advice would you give to writers who are still trying to get their footing steady in the craft?

RS: First, read what great writers have to say about craft. You’ll find a lot of overlap in what Chekov, Conrad, Colette, Hemingway, Simenon, and Henry Miller have to say. Second, have a reader in mind—perhaps a mentor, friend or writer you admire—whom you can write for or to, as if writing a letter to them. Third, write a lot and live a lot. The more you write, the better you will get at doing it, and the more you live, the more you’ll have something to write about.

NA: Who are some of your favorite current writers?

RS: For some months I have been reading solely mysteries and spy novels. I recently read Alan Furst’s World War II spy novels—I have one left to read of the dozen he wrote–many set in Paris. Dark Star and Spies of the Balkans are two that are not only good thrillers but also good literature. Ditto for Australian crime novelist Peter Temple’s The Broken Shore and Truth. The former won the 2005 Colin Roderick Award for the best Australian book of the year. Both are gritty depictions of dysfunctional urban life Aussie style.

NA: You are trapped on an island with every amenity you could imagine, except books: you only get three, which do you pick?

RS: The Essays of Montaigne, The Complete Works of William Shakespeare, and Julia Child’s Mastering the Art of French Cooking, all nice, thick tomes that would give me something to chew on. 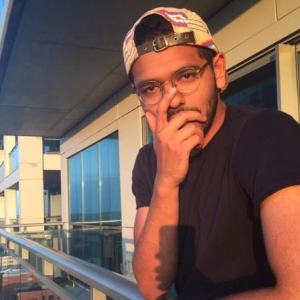 Nishat Ahmed is currently a first year MFA Poetry Candidate at Old Dominion University and the author of the poetry collection “Ghosts In Bloom.” When he’s not listening to music of the pop punk persuasion and consuming copious amounts of Chipotle, he enjoys biking through town meeting new people to give him inspiration, and also to make fun of.