“Why is it women who suffer the most?”

The question interrupts the movie, a Saturday night sprinkled with buttery popcorn and Troy and the clomping rhythm of horse hooves on the screen. The girls are asleep and I resist the urge to run to them, straining against invisible constraints that often plague me when my daughters are tired. Quiet. Content.

“I reject the premise,” Ben says.

Ben always rejects my premises until I explain. Then, his face breaks slightly, a smile stretched taunt across its length.

I stand and walk the few steps to my home office. Its pink and red rug itches the underside of my feet. I pull Edith Hamilton from the bookshelf on the far wall. I just finished Mythology and it’s now filled with highlighted passages and bent pages. I wasn’t studying it, but this book requires this level of devotion. It calls the reader to attention. Suddenly, the night has a theme.

I turn to a page in the opening of the encyclopedic anthology. I know exactly what I’m looking for, a Homeric hymn about Demeter and Persephone. I read aloud, allowing the story to fill the room, nestling into the cracks in the fireplace’s tile.

Within the story, Persephone strayed too far from her companions and is kidnapped by the king of the underworld. In her absence, her mother, Demeter, grieves so severely that flowers lose their bloom. Crops wither on the vine. Demeter is haunted by Persephone’s cry, which fills the hillsides and are carried to the sea. Finally, Zeus intervenes and sends a messenger to retrieve Persephone from his brother’s side. In her haste to leave and return to her mother, the king of the underworld makes Persephone swallow a pomegranate seed. She complies and due to this action, is forced to return to the underworld for four months each year. During that time, the ground grows dry and brittle and gray. Persephone becomes Goddess of Spring and Summer.

“Her mother is the one who mourns her loss,” I say.

Ben remains unconvinced. The book nearly vibrates in my hands. Our television screen is filled with a paused frame of the Aegean Sea.

“What about the mothers of great men?” I ask. “Thetis, the mother of Achilles who warned him that seeking notoriety would equal death. Who dipped everything but his ankle in the sea to seal his immortality. Or, Rhea who lost all the children before saving Zeus from being swallowed as an infant by allowing Cronus to swallow a stone. Don’t get me started on Medusa, whose curse and subsequent beheading was a result of her own rape.”

“The men didn’t fare any better,” Ben says. “Hector. Achilles. They’re the heroes of the movie. They die.”

“There are worse things than dying. Suffering is worse.”

We watch a few more scenes. Men’s’ bodies are set on fire after their death. Women weep. Helen holds Andromache’s hand as her husband gets stabbed. A baby wails in the young widow’s arms.

The corner of his mouth is smudged with butter. It glistens in the semi-darkness. I pull a blanket just beneath my chin.

This morning, I watched a female orca carry her dead calf. Today was the 10th day of the mammal’s shiva.

I saw Laura Tibbett plead for the swift and safe return of her 20-year old daughter. Mollie’s been missing for 18 days.

In the Sudan, women have to choose between being raped and feeding their family. Seventy percent living in camps are raped. It’s been years.

“It’s all women,” I say, rejecting his premise.

I look down at the picture of Atlas in my mythology book. His spine is crushed under the weight of the world. His brow furrowed. On closer inspection, it seems a hair falls daintily over one eye. His mouth a straight line. His forehead is creased in both grief and exhaustion. Consternation.

I wonder if this once, the Greeks were wrong.

I wonder if Atlas, whose punishment is to carry the weight and wreckage of the world, is actually a woman.

I burrow my head into the covers, unwilling to further explain my tears.

Their laughter calls me to the backyard. My two girls.

The oldest with her head flung back, wild wisped wings framing her temples. Her eyes closed, and her back teeth curved, textured seashells.

The youngest with a dimpled fist propped against her chest. Her laugh a baritone to her sister’s cackling alto. The giggle of the joke teller rather than the receiver.

Both have the same chestnut shaped eyes. The same slender wrists. An identical flick of the eyebrow that signals irritation. Both were born with a constellation of freckles dotting their noses and short, fat thumbs perfect for sucking.

As one wraps her hand around the other’s palm—their fingers a bridge, a chain link, a knotted tow line—I step into the shadows. My presence is an intrusion. An interruption of intimacy.

My two girls, I think to myself. My world, I immediately autocorrect, feeling the confined limitation of the previous statement. Without them, I would feel like an empty husk of corn or the shell of an avocado after its creamy insides were spooned out. Now that I know them, unknowing them is impossible.

The younger one points to the sky as a milky cloud that looks like Captain Hook’s ship drifts past. She cups her hand and leans against her sister’s shoulder, whispering. Another peal of laughter sprinkles across the garden.

I lean against an old oak tree, its base too wide and sturdy to fully embrace. When Ben once suggested felling the tree, I bulked and huffed. The tree was home, its roots crawling from the soil. Entwined. Strong. Magnanimous and menacing. The bark itches my forehead, but I remain still, too busy watching their normal gaiety to move.

Earlier that day, I watched Facebook videos of a different scene. There were children wailing. News clips of mother’s being told their baby was being bathed, their escape rinsed from them with foaming suds of simplicity and understanding. Really, they were reports of zero tolerance. Zero second chances. Zero opportunity for rest, reprieve, renewal. In the confined cages of Trump’s creation, there was an underlying drone—pleas for Mama.

The guards are instructed not to hold them.

The guards are told not to pick them from their soiled beds.

The guards’ laughter punctuates the pain, jovial and obliging and willing.

I sway, and a twig crackles beneath me. I inhale slowly as my girls realize they are no longer alone.

“Mama,” my daughters yell when they spot me. I twirl a bougainvillea vine around my pointer finger and the flesh puckers beneath the restraint. Both girls collide into my meaty thighs as my shadow shifts, revealing myself more thoroughly.

Mama, they say. The two syllables a cacophonous symphony that tumbles from their tummies. Context is everything, I think, wrapping myself in a cape of appreciation. I was born here. I bore my babies here. I place my hand in the plain between their shoulder blades, grounding them. Burying their residency as deep as the roots of the ancient oak which I won’t ever fell. Context is everything, I think, as regret slices up my spine, resting anxiously at the stem of my brain.

Mama, they cry together.

How can we claim we don’t hear them?

These are the animals known to mourn.

Suffering looks almost the same across all species. I remind myself of this when I lose another pregnancy.

When I was round and fat with Ella swimming inside me, I watched a news story where a panda lost her cub. In their lifetime, most pandas only give birth to one cub. The mother was overcome with grief. She gulped and whimpered. Pandas sob.

All suffering sounds the same. I remind myself of this when both my mom and nanny are diagnosed with breast cancer.

I read Victorian novels as Addie plays at my feet. She has a toy dinosaur with long eyelashes that she calls Dragon. Dragon eviscerates a city Ella spent the morning carefully creating.

My mom is with Nanny at the hospice center when she passes. Nanny didn’t want to die in our home. Her chest is an open wound. When she was sick, my mom drained it and cover it with fresh bandages as clean and white as the muslin swaddles I wrapped my girls in when they slept as infants beside me.

“In the end, she talked to Chris,” my mom says.

Chris, my uncle, died years before. After his death, Nanny spent much of her time researching near-death experiences. She wanted to know if someone had glimpsed God. Was there verifiable proof?

All suffering feels the same.

As a young man, Chris was once hit by a train. He was running late for his construction job. The hard hat he put on muffled the sound of the train whistle. For a few moments, when they drove from the house to the hospital, Nanny thought he was dead.

Despite watching her at my great-grandfather’s funeral. At my Chris’s wake. After her house burned to the ground. Even after cancer, I don’t remember what my Nanny’s face looked like when she cried. I can’t imagine lukewarm tears cascading down her cheeks.

All suffering is the same?

When my girls were tiny, they slept in a portable crib six inches from my side. I listened when they sniffled and shifted. They never cried too loudly, too auspiciously, before I carefully swooped them into my arms, nudged my nipple in their gapping mouths. My arms were their safe space. Their home. They dug their infant sized nails into my flesh. Ella was here. Addie was here. They tattooed my body, branding me as theirs. More than anything in life—more than a wife, more than a daughter, more than a writer, a reader, a consumer of over-priced Anthropologie dresses—I am a mother.

It’s been shown that new mothers are more responsive to an infant’s cries than fathers. Their brains are hard-wired to hear a child’s pain or hunger. It’s called the cuddle hormone. But what happens when the cries are our own? When your child is gone, and the urge to cuddle remains?

It is forever unique in its terribleness. Each obstacle like the individual curves and groves that comprise fingerprints. Like the distinct picture children see in the clouds. Each tear is one story, one memory, one captured moment that couldn’t be suppressed or denied or taken back. Even though I don’t remember Nanny’s tears, they were there. Somewhere.

Much like the lines etched on your stomach after pregnancy – even if no child came.

Much like circles beneath your eyes from the lack of sleep – even if it’s the memory of your child that wakes you.

Suffering is solitary and personal and communal and universal. It’s the call to action we should each respond to as one of the mammals known to grieve. 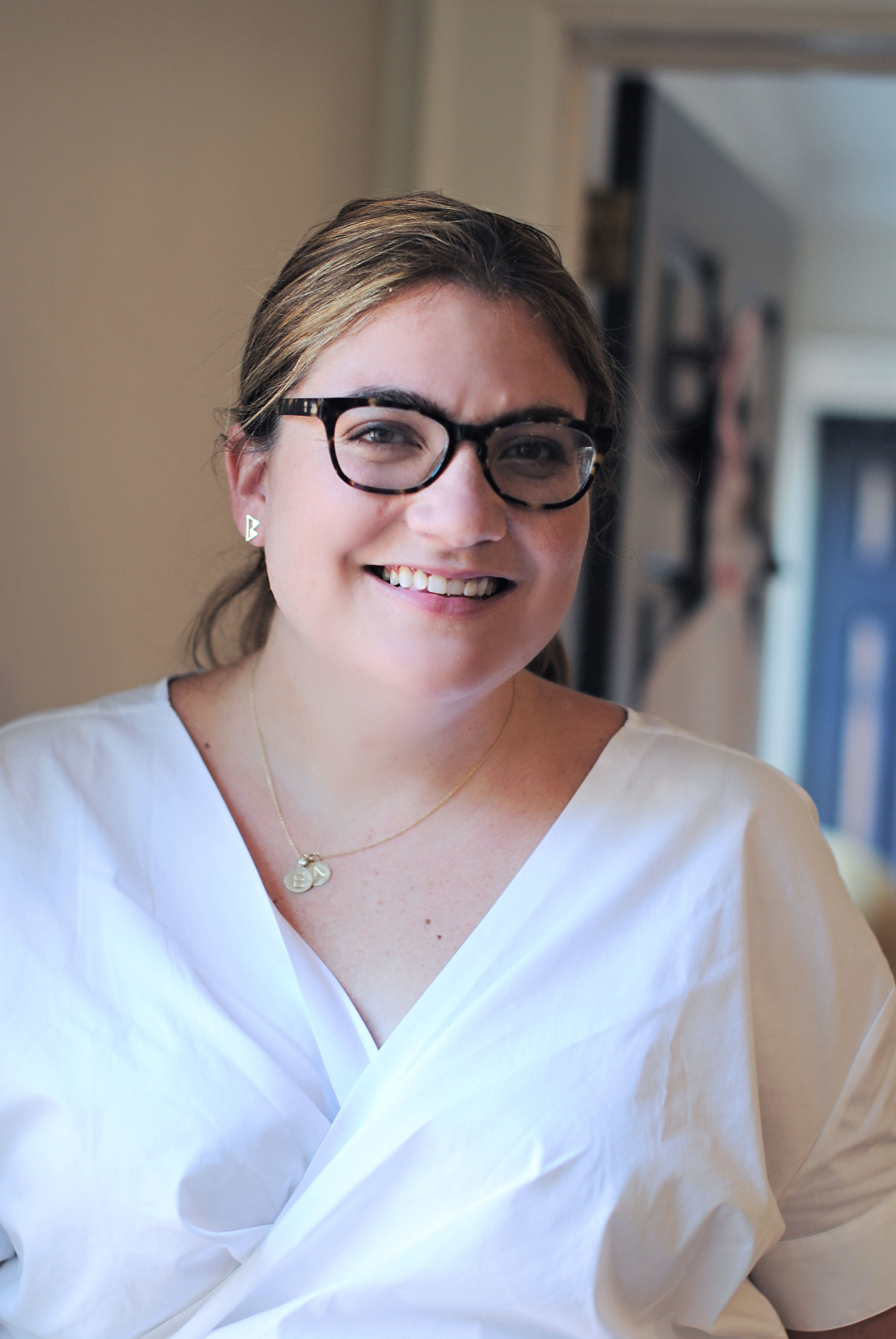 Katie Sherman is a journalist and an award-winning author who covers fine food and parenting—two things rarely related—in Charlotte, NC. Her story, “Hook Wounds,” won theSame’s short story competition and was nominated for a Pushcart Prize. Katie’s story, “The Fairy House,” was short listed for New Letters Fiction Award and Short Story America’s Story Prize. She has an MFA in fiction as well as an affinity for Southern Gothic literature, cider beer, Chicago, and morning snuggles with her two daughters. Katie has published extensively in literary magazines across the country and is working on her debut collection.