Driving Over Afton Mountain Three Days After the Election

It’s possible to run a deer to death.
Deer aren’t made to run long distances.
They’re sprinters. When forced to run
for too long, their hearts give out.
The deer in my neighborhood dislike me
because I run. I like to pretend
we are chasing each other around the hill,
but I know I am chasing them.
2 Sundays ago, I collapsed
on the side of the road, my asthma so bad
my legs wouldn’t carry me anymore.
As I sat coughing in a stranger’s yard,
I watched the deer graze across the street.

Up ahead, my headlights reveal
a ribcage gleaming in the middle of my lane.
The coyote’s eyes flash. Its head hangs
low as it slinks away from its feast.
It’s late. There are no other cars.
I veer into the other lane, slow down
to pass the carcass. I already know
what it is, but still I want to see.
Additional warnings are posted
starting in late October, urging everyone
to exercise caution. But it appears
no one is heeding them. I wonder
if most people are even paying attention. 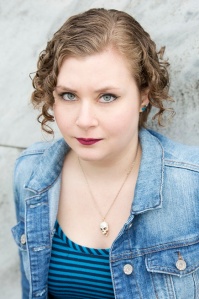 Ellie White holds a BA in English from The Ohio State University, and an MFA from Old Dominion University. She writes poetry and nonfiction, and is the creator of the online comic strip “Uterus & Ellie.” Her work has appeared in Antiphon Poetry Magazine, Harpur Palate, Tincture and several other journals. Ellie’s chapbook, Requiem for a Doll, was released by ELJ Publications in June 2015. She currently lives near some big rocks and trees outside Charlottesville, Virginia. To see more of Ellie’s work, please visit her author website, elliewhitewrites.com.