“What are we doing here?” These are the despairing words my wife and I have said every so often since midnight on election night.

You see, Ariane is Dutch. I am Mexican-American.

Ariane has but one reason to live in Vermont: me. We married in 2014 and, thanks to the Windsor vs. US Supreme Court decision six months earlier, she received a marriage-based green card. Thanks specifically to Justice Kennedy’s notorious swing vote, U.S. federal law now allows US citizens to live in the U.S. with their non-citizen same-sex spouses. So Ariane sold her home, loaded her belongings into a sea container and, cats in tow, took a one-way trip to Vermont.

Ariane joined me less than two years ago, but I have called Vermont my home for twenty years. I came from Mexico as a Ph.D. student. I taught beginning Spanish while pursuing my coursework. Thanks to my teaching assistantship, my Ph.D cost the outrageous amount of $300. For a penniless college graduate like myself that meant the difference between the prospect of becoming a professor with a more than decent income, and cobbling together two or three jobs for subsistence wages in Mexico. Meritocracy worked: I was treated fairly and got a job at Middlebury College, where I have thrived professionally and raised two happy, healthy children.

I was welcomed in Vermont, yet for a long time I was not whole. I took decades before I could come out. When I finally gave myself the gift of coming out for my fiftieth birthday I was terrified: would I keep my friends? Would my kids’ friends come for sleepovers at our house, as when I had been seen as heterosexual? I am happy to report that, for the most part, me and my kids’ life has not been upended.

But then came November Eighth. Ariane and I have cried several times—those low moments pepper the many others when we stand up and, as President Obama said, we dust ourselves off and get to work. Since the fateful night I have spoken to three classrooms full of students about the need to listen deeply, to see others’ point of view and seek common ground no matter how different from our own. Not to hush, but to ask questions and respectfully disagree. To work towards the change we want. We grieve together. We heal through writing.

But the world is out there, and it is changing fast. The T.V. shows me police assaulting protestors. Swastikas on storefronts and Jewish centers. On my own campus hateful, criminal language has appeared graffitied on students’ doors.

What are we doing here? I go home with a headache. I have had a headache for the past few days. I look to Ariane for her support. She for mine. I want to hold her, bury my head in my pillow and close my eyes.

That is when my kids come to the rescue. My son, a sophomore at Bard College, calls a meeting and organizes a protest. He offers free hugs, cookies, and political leadership. The activist groups on his campus are coalescing and organizing a meeting in town.

Then Camila, my thirteen year old, nips potential harassment in the bud like only she can:

Camila: Yeah, so I’m both a bad hombre and a nasty woman.

Did I say Camila’s nickname at school is General Badass?

With a daily dose from her I can face the world.

We may occasionally feel terrified, but one thing is certain: my family has fought too hard for the freedoms we have gained. We will not let anyone strip them away from us. 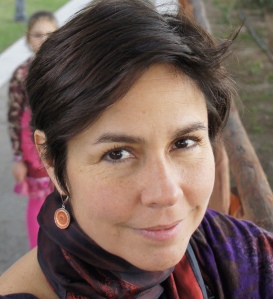 Estela González holds an M.F.A. in creative writing and a Ph.D. in Latin American literature. She writes in English and Spanish about the intersections between class, sexual, and environmental justice. Her work is featured in the Best of Solstice Literary Magazine, Barcelona Review, Cobalt, Cronopio, Flyway, The Fem,Kudzu House, the Revista de Literatura Mexicana Contemporánea, Salon, and the Vermont Public Radio Commentary Series. Her novel Limonaria and her new project, The Age of Aquarius, tell stories about endangered species such as sea turtles, migrants, and LGBT people of color.