My mother did not abandon her whole world as she knew it
…..and furrow her brow into the telltale wrinkles of a fretting immigrant
…..and agonize over take-home practice tests printed on cheap newsprint
…..and hole herself up in the public library to suffer in profound silence
…..and pour over every scrap and tome of English text within her reach
…..and question if there would be room left for any Spanish in her brain
…..and read dictionaries and encyclopedias forward and backward
…..and sharpen her No. 2 pencils to crisp points like tiny knives
…..and don her best silk blouse and pantsuit à la Hillary
…..and sit for an exam she was terrified of failing
…..and recite an oath that made her knees shake
just for a racist xenophobe to occupy la Casa Blanca. 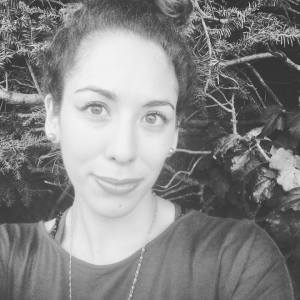 Christine Stoddard is a Salvadoran-Scottish-American writer and artist who lives in Brooklyn. Her writings have appeared in Marie Claire, The Feminist Wire, Bustle, Teen Vogue, The Huffington Post, Ravishly, So to Speak, Jimson Weed, and beyond. In 2014, Folio Magazine named her one of the top 20 media visionaries in their 20s for founding Quail Bell Magazine. Christine is the author of Hispanic & Latino Heritage in Virginia (The History Press) and Ova, a forthcoming chapbook from Dancing Girl Press.